Costa Rica is the place to be for birders.
It's a small country – 19,700 square miles (51,100 sq. km) - as big as Denmark or the U.S. State West-Virginia.
Nonetheless, it has a wide array of habitats – rainforests, mountains, green valleys, mangroves, vulcanoes etc- attracting more than 800 species of birds.

When I recently visited Costa Rica, one family of birds caught my attention: the hummingbirds, also known with their scientific name: the Trochilidae.

Ever since my fascination for birds started in my childhood, I always wanted to see hummingbirds in the wild: seeing them 'hum' from flower to flower, drinking its nectar.
Costa Rica has been on my bucketlist for 20 years and now I had the opportunity to fulfill both wishes. 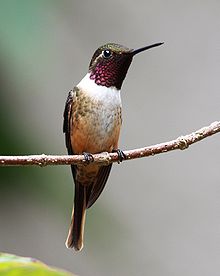 Although the hummingbirds are present in all Costa Rica (even in the busy capital San Jose), the best time I saw them was in Monteverde (see Figure 1 Costa Rica map nr.13)
Monteverde is a city in Costa Rica, known for its surrounding cloud forests, which are visited yearly by numerous tourists and scientists.
The cloud forests are full of plant- and wildlife, which you can explore from the ground and up into the canopy. Monteverde has the largest number of orchids in the world and it is also home to the shy jaguar and the quetzal, one of the most beautiful birds of the neotropics.

When exploring the forests for hummingbirds you will not find them that easily, because they are agile and small. A better way is to observe them at the Hummingbird Gallery in the Monteverde Cloud Forest Reserve.

Here, the hummingbirds are attracted by feeders, filled with sugarwater.
Different species were present like the large violet sabrewing, but also smaller ones like the mangos and the very small and beautiful magenta-throated woodstar (as seen in the picture above)
The Youtube-video below show some of the species I saw.


Video 1: Violet sabrewing etc. at feeder at the Hummingbird Gallery at the Monteverde preserve.

These birds were awesome and I noticed a lot of stuff I want to share.
When flapping their wings, the hummingbirds make a 'zooming' noise: the 'humming'.
Now I know why they are called hummingbirds in English.
In Dutch, they are called 'kolibries', which might be derived from a Carribean language meaning 'shiny surface'.
Next to the 'humming', the birds were also very agressive towards each other when feeding.
I saw several fights at the 'dinnertable'. Quite brutal, because the hummingbirds have sharp long beaks, with which they can hurt each other quite easily when 'fencing' in the sky.
Smaller birds were easily scared away by the larger species, but not always.
The already mentioned woodstar 'fenced' fiercely with the mangos, although it was no match for the sabrewing. Fortunately there were enough feeders, so every bird could get its nectar.

Your experiences with the hummingbirds

I only spent an hour at the Hummingbird Gallery and I was sad leaving the hummingbirds.
But it is an experience I will remember.
What are your experiences with the hummingbirds?
Do you have a feeder in your garden attracting them or do you also observe them in the 'wild'?
I would like to hear your stories!

Cordny Nederkoorn
Founder TestingSaaS , the online Tell-It-as-It-is SaaS community
SaaS | softwaretesting | security | privacy | computerforensics | identity | datascience.
I started this community to discuss SaaS-related areas without the usual marketing mumbo jumbo. I just want to tell it as it is.